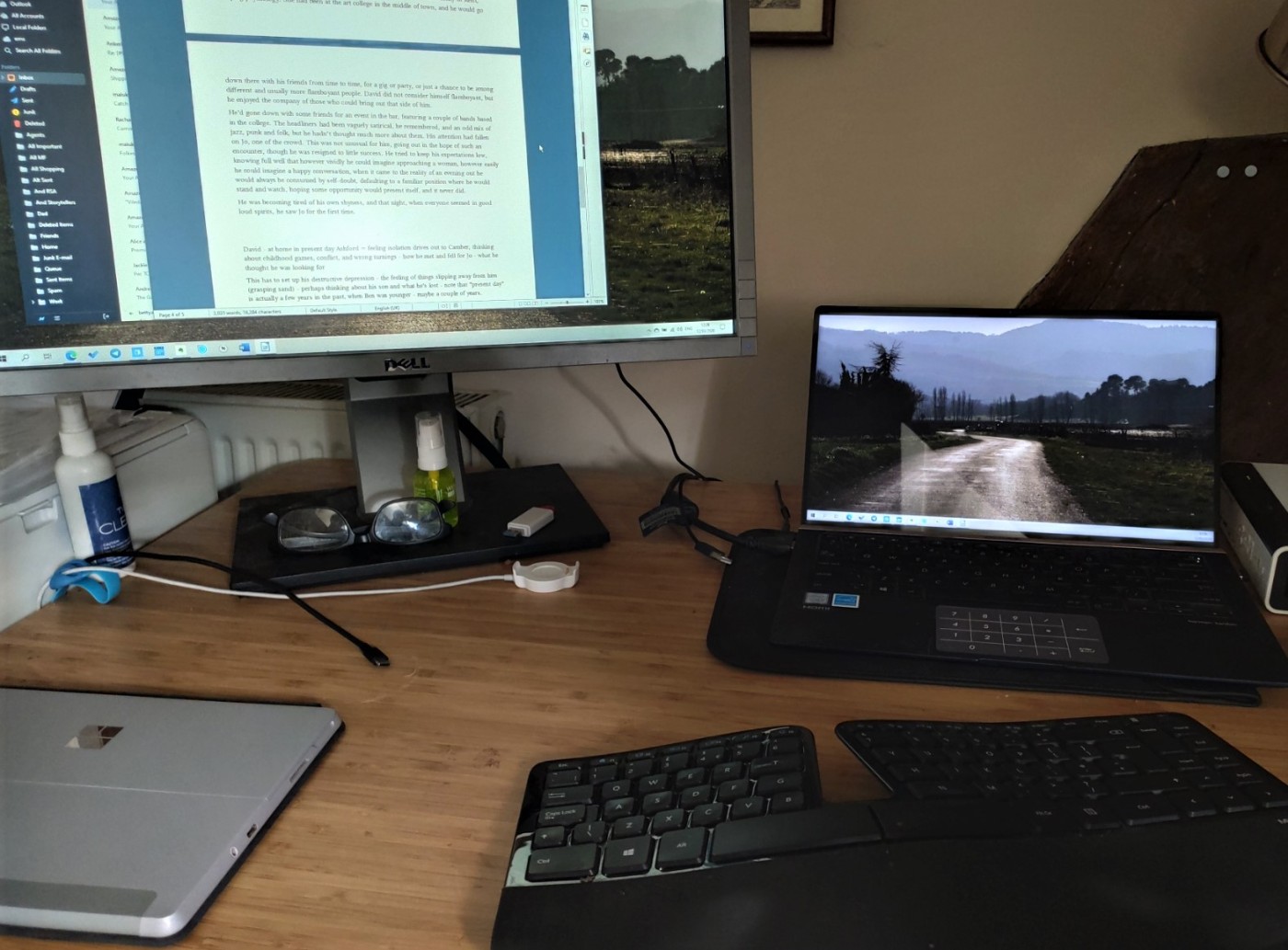 Having complained about software companies’ arbitrary and self-serving redefinition of what it is to buy a product, I wanted to reflect on the alternatives.

I work from home as a freelance writer, so I have more choice about the software I use than the average corporate bod. I also have to pay for it for myself, which does focus the mind on value.

I should say at the outset too that I’m not an Apple user or a fan, and here I’m not going to get embroiled in that argument. So what follows refers primarily to a combination of PCs running Windows 10 linked up to an Android 10 phone. (I will at some point write a separate blog about the quest for perfect mobile productivity).

Beyond Microsoft Office
In part one I noted that the incremental improvements to Microsoft’s Office 365 in the last five years would not compel any standalone user to upgrade. The cloud storage element is enough to justify the subscription, particularly if you have more than one user on a Home package, and in a sense then you might as well use the included apps.

And I do, but there are better alternatives. MS Office has a stupidly inflexible and cumbersome user interface (UI), and crucially its document synchronisation is unreliable away from an internet connection.

Perhaps the obvious alternative is LibreOffice. It’s free to use, and is as powerful in most respects, without being as pointlessly complicated. You can fully customise its appearance, and it’s still improving with every release. I’ll come back to its weaknesses.

There’s a good paid-for alternative in Softmaker Office, which is lighter on its feet, and offers both excellent customisation, and MS Office compatibility, and is a fraction of the cost of the standalone versions of MS Office.

But its development path and commercial model highlight a difficulty. It’s getting on for three years since the suite had a major new version. There’s an honesty in this, reflecting the overall maturity of the product, and the limited scope for improvement in the three major apps. In the meantime Softmaker has released an “NX” version, which is functionally identical (there are some price variations reflecting cross platform options), but offers the applications for a monthly or yearly licence payment.

If things were as they used to be, where you would want to buy an upgrade within a couple of years, the yearly licence might be an attractive alternative. But as with MS Office and indeed Adobe’s Creative Suite the service packs released in the last three years have been little beyond bug fixes, and it is hard to imagine any significant step forward in terms of new features (I’d be very happy to be proved wrong about future improvements).

It says something about the assumptions underpinning the software industry that this should appear to be a problem. If you’re a manufacturer in a mature industry (let’s say power tools again), customers will buy their drills and are unlikely to replace them for many years. You’ll be relying on new customers coming into the market, and innovation in other related categories. Software companies have shown no such ability to diversify.

To survive, and justify an annual licence, Softmaker would have to compete with the service element of MS Office, and offer some useful cloud storage (useful enough to switch off OneDrive, even though it’s more or less baked into Windows 10). That’s going to be a tough job, because it would also mean potential users would have to be comfortable fiddling with their file management settings, something that most sane people would prefer to avoid (yes I’m among the nerds who are happy to do such things, but I know I’m in a small minority).

And that “useful” cloud storage is key. It needs to compete with Microsoft’s generous offering. Other Office providers like WPS and Mobisystems do include a cloud element, but it’s not compelling. (Google’s own office tools are to say the least basic).

Email options
Then there’s email. Outlook is a fundamental part of MS Office. It’s a mature client, with some strengths, and some amazing faults. Unlike the built-in Mail and Calendar app in Windows 10 it doesn’t have a unified inbox. It doesn’t support writing to a Google calendar.

Softmaker offers Mozilla’s Thunderbird with some harmonised icons, but Thunderbird is freely available anyway, and its antiquated UI needs more than new icons.

It seems then that in the niche world of email clients there remains scope for improvement, so paid for upgrades are still viable. emClient is the fullest featured option, doing everything Outlook can, as well as the things Outlook can’t, with integrated calendar and contacts for both Microsoft and Google as well as local storage. It’s generally a great program but its UI is less attractive than Outlook and some other alternatives, a situation which sadly doesn’t seem to have been radically remedied with its forthcoming version 8.

Mailspring offers a different “service” element, with its paid-for option letting you see when people have opened your mail or clicked on a link. It’s a good looking and promising client, but the paid-for option is too expensive, and it’s too buggy for everyday use.

Mailbird does work well, with a crisp and modern UI, but it lacks Microsoft calendar integration. I imagine that’s in the pipeline, and when it’s there I will look again.
For the moment at least I’ve settled on Postbox, a fork from Thunderbird, which addresses the latter’s terrible UI, and is a good functionally-focused mail client. It has to be used in conjunction with the Windows 10 calendar and contact managers, but that seems to be a very usable combination.

I do have Microsoft Word and Excel for business work, because they come for free with the cloud space I want, and represent a standard, with assured client compatibility. For documents I don’t intend to share I had intended to settle on LibreOffice. Its Microsoft format compatibility is not perfect still, but that’s not an issue when you’re not file sharing. In any one day I’m likely to be moving between the powerful laptop on my desk and a Surface Go in cafes and bars (and trains), which means I’m periodically working offline. Critically both LibreOffice and Softmaker’s suite seem to cope better with offline working than Microsoft apps. LibreOffice Writer doesn’t display fonts as nicely as Word, but I’ve found a workaround by setting the document magnification at 103 per cent.

Having said all that LibreOffice comes with a bug on my main desktop installation, and I can’t work it out (it doesn’t happen on my Surface Go). So I’m going to carry on using Softmaker Office, at least until I see what happens with the next version.

Liking your customer
LibreOffice continues to evolve, and has a future because it doesn’t rely on a commercial model. It’s ironic but Microsoft too is effectively giving away its software on the back of a useful paid-for service. All this suggests that the future software landscape could be very different, with “free” becoming a rational option.

As email clients show, there’s still some scope for the evolution of specialised apps that can offer compelling upgrade paths (ie it’s worth paying for the upgrades). There’s also scope to grab market share from those who have jumped on the subscription bandwagon without offering any service value. Adobe is the most prominent offender here, having led the charge with its Creative Suite. In this it’s effectively exploited its near monopoly among visual design studios and practitioners, but an unlikely David has appeared to challenge this Goliath, emerging from the small British software house Serif. Affinity’s suite of creative applications (Designer, Photo, and Publisher) have been garlanded with accolades from both the Apple and Windows worlds. Each is available as a one-time purchase. Inertia will no doubt keep Adobe in its dominant place for a while longer, but if there is any rationality in the market it can’t last.

We need this to happen, because current practices are a form of licensed theft (I won’t name and shame those products that offer themselves effectively as a one-off purchase, saying only you won’t get automatic upgrades if you don’t renew the annual payment (which would be fair enough) and then disable important functionality which had nothing to do with any upgrade if you fail to renew (which is not fair enough).

In short, don’t buy annual licences where there is no useful service element, and support instead those products that offer their benefits on honest terms. Affinity will probably want me to part with some more money when they launch v2 of their products. I will do so willingly because I’m grateful to the company for doing what it’s doing and I want to support it. They’re sensibly trying to build a community of happy creative types, developing momentum against the inertia that keeps Adobe secure. This is what being customer-focused looks like. It’s a cheering alternative from simply trying to gouge every penny out of us.